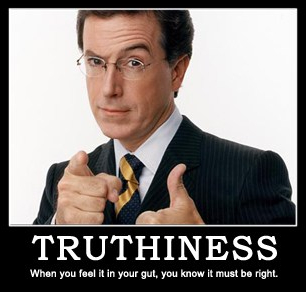 I’m listening to a podcast where they are talking about using interviews with Holocaust survivors as future unalienable “proof” to deniers that it actually happened…what I can’t stop thinking is, with rapidly advancing video editing (and deepfakes) anything we see won’t be any proof at all.

Which begs the question…how will anyone know *anything* they see, or hear is real? We are already in the age of “truthiness”, to steal a Stephen Colbert term that hit the nail on the oh-so-perfect-head; if social media is already manipulating us, and we as consumers only believe things that already “make sense” to us, the impact will be serious; people will only trust what they already believe – and disregard what doesn’t jive with their gut.

There are people / companies working on being able to identify a deepfake, once they get so good that the engineered fake is imperceptible from the original. I’m not so sure the general public will much care; much like how easily fake news is accepted at face value, despite solid evidence to the contrary – and science deniers (flat earthers!) who disregard even the most basic tenets science – we seem to have indeed moved to a post-truth society.

And the ability for entities to manipulate public opinion will be even greater.  In college I took a class in Propaganda and Film with Roger Manvell (fascinating man btw), who ran propaganda for the UK in WW2; we learned about techniques that were used to influence public opinion…social media these past few years has upped the stakes; will future education include training in critical thinking, to be able to identify manipulative content and strategies? I somehow doubt it.

We live in interesting times.