I’m not a fan of the ubiquitous listening devices. Not that having a virtual assistant always on the standby to serve my every (ok, some) need wouldn’t be handy; it would be fun to be talk to my house. Seriously, I work from home. It gets lonely. But I digress.

It’s because of the growing interconnectedness of it all, combined with lax privacy laws and inadequate digital security. They *say* they’re only listening for your action word, but the Ts&Cs prove otherwise; as do recent legal events when it’s been shown that not only are they always listening, but always recording.

And the Amazons and Googles of the world will eventually be more than happy to sell your conversations to advertisers and others (yes, government – I’m looking at you. Who knows if  my recent (theoretical) conversations about microdosing LSD won’t some day be of interest to you, or the health insurance companies.)

So I recently revisited a favorite device, launched in 2005 (the ice age for digital devices). I  was rather obsessed with it at the time, but didn’t take the plunge  and have been sorry ever since. 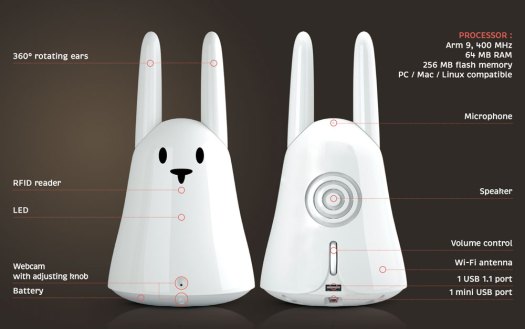 It’s called a Nabaztag (rabbit in Armenian!). It was a listening device that wasn’t tied to any multinational conglomerate; it was an open source device that read your emails to you, the weather, stock market report, news, RSS-Feeds, MP3-Streams, acted as a walkie-talkie with another Nabaztag, and a few other things.

Point is: it did much of what Alexa and Siri do (other than order you things, although someone could probably program an app for it that would) without reporting back to anyone.

A device way before its time. And completely open source.

Why aren’t there any of these types of listening devices on the market now? Surely some independent company out there could come up with a current day equivalent? I bet it would sell like hotcakes – what an opportunity. I know I’d get one.

And then kit it out like people used to do with the Nabaztags 😊 The viral potential for getting the word out about something like this is incredible.

Unfortunately I’m reduced to scouring Ebay for the occasional one that comes up for sale, and since the server’s been decommissioned, turning into a programmer to make it work (although there’s a very lively worldwide community of hackers/enthusiasts with a fair number of boards sharing code and “how to’s”). And that takes a LOT of time.

Someone get on this. Please.

Invited to the Coburn Ventures‘ annual gathering as a “thought leader” this week, for the fourth year in a row! – always a fun gathering of the best and most interesting thinkers (thought leaders + investment professionals) from around the globe, pondering the future direction of various technologies on business and humanity.

What to wear…always the question.

So to the intertoobz I go. And it struck me: why am I internet shopping in exactly the same way I have been since, well, pretty much the beginning of ecommerce? Searching based on some key words, ending up on a store’s website with a bunch of thumbnails, mostly on young gazelles who I think I could probably stick two of into one of my dresses…maybe there’s a filter, sometimes even with filtering categories I care about. Ordering 2, 3, 4 alternatives – which will be returned if not right.

Such a waste. Of time, of delivery gasoline…of raw materials. I am imagining the mountains of clothing, made in amounts forecast to be roughly correct – but then it’s 60 degrees in November in New York, and they all waste away in some warehouse, somewhere. Or in stores….some end up in outlet stores…some go back to the manufacturers, only for some to be sent to online clearance sites…or some far away country, dumped on a market that cares less about trend.

Where’s my 3d printed clothing, made to my (scanned) body size, to my specs? What if I am not a 20 year old gazelle, and I want the skirt to be a few inches longer? Shorter?

Why has there been so little disintermediation in the way we shop and dress ourselves?

I ponder this as I push the “buy” button, and pay and extra $20 for fast delivery, contemplating all the bells, widgets, gizmos and wheels which immediately starting turning in response. And think back to this blog entry, which was based on a lot of thinking I did in 2006. 10 years!!

The ultimate “wearable”; smart temporary tattoos that have functionality. Seriously I think all the gadgets we currently carry – phones, trackers, health monitoring devices will very soon just be stickers that we attach to ourselves (or be woven into our clothing) – wrote about both of those before (https://lindaricci.com/body-stickers and https://lindaricci.com/quantifying-apparel).

These are fascinating. Coming out of the MIT Media Lab, these temporary tattoos have different configurations: one iteration has an NFC chip embedded in it (allowing for interaction with nearby gadgets), another lets you use your finger to interact with your computer screen…made out of real gold or silver leaf, anyone can make their own design / circuits, and “tattoo” them on their skin.

While it’s early days on how powerful the interaction is, the battery / power needs are limited – and of course, the programming that drives the interaction is a big question mark for me! – it’s a harbinger of the future and has fascinating potential applications.

We are already moving towards being a disposably minded society. From apparel to jewelry, electronics to furniture, we are in the midst of a revolution in attitude about how we acquire and consume goods. Clothing isn’t bought to wear for years, but is increasingly cheaply made and sold, intended to be worn and discarded a few months later…people aren’t buying a “serious” piece of jewelry once every few years, intended to be eventually be handed to children and posterity, instead cheap “fun” mass produced jewelry that scratches a trendy itch prevails. Once, our grandparents bought a sofa when they got married and meant for it to last decades; electronics are traded in for upgrades every six months.

Even music has gone from owning physical albums to streaming, meaning we don’t have to “own” anything, but can stream whatever we want on demand.

So is it any surprise that when the need for a piece of equipment is eliminated because we can have one to do whatever we want at the moment, the desire or need to own an object dedicated to one function will disappear?